Every day, either on purpose or because of their natural hunting tendencies, dogs and cats eat bugs. However, deliberately feeding insects to a pet is a whole different can of worms!

Eating insects is not a novel for animals (or humans). Around the world, many cultures consume insects for their nutritional benefits or as delicacies. Crickets offer organoleptic qualities – taste,  smell and nutritional properties – that make crickets one of the most widely consumed insect species.

The consumption of crickets and their use as a significant source of protein and other nutrients has been limited by traditional production and harvesting methods. It is the introduction of precision agriculture and the ability to scale the production of this quality protein to meet demand that has enabled its adoption on a broader scale.

The introduction of precision agriculture – indoor vertical farming and the control of production factors such as high-quality feed, habitat, and environmental conditions – assure the traceability and quality of the crickets and their humane treatment as a food ingredient.

Premium is defined as:

There are many reasons why we believe Cricket Protein is on track to become the next big thing in pet food ingredients. Simply put, it is Premium! 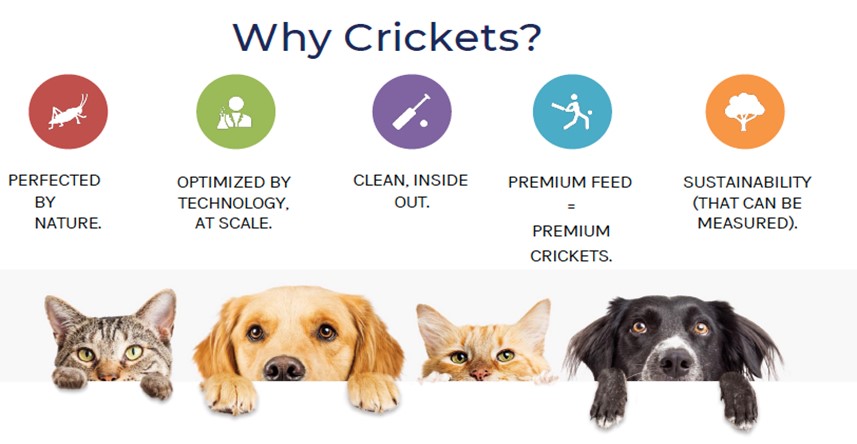 Pound for pound: crickets provide nutrient-rich protein with less fat and calories than traditional animal sources. Crickets are nutritionally dense, and their natural exoskeleton is a source of prebiotic fiber which is not found in animal proteins.

A study into the usage of crickets in dog food and treats, published in the Journal of Nutritional Science in 2014, examined whether crickets contained the protein and essential amino acids that dogs required.

The study concluded that crickets exceeded the minimum protein needs and contained amino acids required for development and maintenance in dogs.

Research has also been conducted on the bioavailability and digestion of these proteins for dogs and cats.

The study showed that crickets had a potential digestibility of 91% in comparison, the digestibility of fish meal, poultry meal, and soybean meal were 87%, 85%, and 94%, respectively. A second study conducted in 2016 confirmed the cricket’s high digestibility.

Consumers are demanding more quality products and services to improve the health and wellbeing of their pets. Premium ingredients are the fastest growing and largest segment of pet food sales, outpacing conventional and generic ingredients.

A Safe Source of Protein

For conventional animal agriculture, safety is a “meaty topic.” Numerous pathogens have resulted in many recalls and issues. According to the United Nations FAO, insects are likely safer than beef, poultry, or pork, which might expose us to infectious diseases if undercooked or handled incorrectly.

Cricket protein is different from other conventional protein sources (cow, chicken, pig). Crickets raised in sanitary indoor farms are free of common infections that afflict the meat industry, such as E. coli, salmonella, staph, and listeria. This is due, in part, to the fact that crickets excrete a unique type of “poop” called frass that is not conducive to problems with E. coli and other typical feces. Frass is sold as an organic fertilizer with unique qualities shown to be beneficial to plant-growth and soil health.

The cricket flour used in dog treats and food is made for human consumption. A panel of experts has evaluated and self-declares Acheta domesticus crickets and cricket powder as Generally Recognized as Safe (GRAS).

Ten percent of all canine allergy cases are related to food, which presents a dilemma for dog parents. These allergies can result in symptoms including licking feet, itchy rear end, chronic ear inflammation, digestive issues, chronic diarrhea, and gas.

Chicken, beef, dairy products, and eggs are the protein sources that cause most common allergies. Feeding sensitive dogs hydrolyzed protein, a form of protein that is predigested and does not trigger an immune response, is a tried-and-true treatment for food allergies.

Recent studies have suggested that the protein found in crickets might have a similar function. According to a 2018 study, dog meals based on insect protein offer dogs with dietary intolerances a good alternative. Twenty dogs with skin issues brought on by food allergies were fed cricket protein-based food, and 60% of them experienced a marked improvement in their symptoms, with only one dog experiencing adverse effects.

Consumers are concerned about the environmental impact of their companion animals and pet food manufacturers, recognizing the extent to which dogs and cats consume many more animal derived calories.

Global demand for high quality protein is rapidly growing at the same time the planet’s resources for protein production are shrinking. For pet owners who are concerned about the carbon footprint of their pets and their pet food providers, traditional livestock production uses a tremendous amount of energy, water, and land.

Cricket protein might be part of the answer. The ecological cost of feeding our dogs and cats is significant. Cats and dogs consume ~25% of all animal-derived calories produced in the United States. Cats and dogs account for 25-30% of the impacts from animal production in terms of land use, water consumption, GHG emissions, and other indicators.

A 65-pound dog needs to consume about 65 grams of protein each day, or about one pound (455 grams) per week. Here’s a breakdown of the impact of different proteins on the use of resources.

Crickets convert what they eat into protein more efficiently than any other animal. Crickets grow fast and breed exponentially; they are perfectly suited to advanced indoor agriculture.

Global demand for high-quality protein is rapidly growing at the same time our planet’s  resources for protein  production are shrinking. In the long term, global protein consumption is expected to exceed global fish and meat supply by 300 million tonnes by 2050, with alternative proteins (plant, insect, synthetic) poised to make up the difference.

The global pandemic has highlighted the challenges of food and feed supply chains, and the need to explore ‘new solutions’ to address these issues. Insect agriculture and specifically crickets offer innovative and sustainable production models that co-exist with and support existing food production systems.

Today, crickets are sustainably mass produced in environmentally controlled, highly automated and digitally monitored facilities to provide critical protein ingredients. Insect agriculture is increasing around the world, and the research suggests that it will offer an environmentally sustainable solution to protein production in the future.

Seatarra Ingredient Alliance is working with Aspire Food Group, the world’s leading cricket producer and will be happy to chat with you about including this innovative protein in your pet food or pet treat formulations.